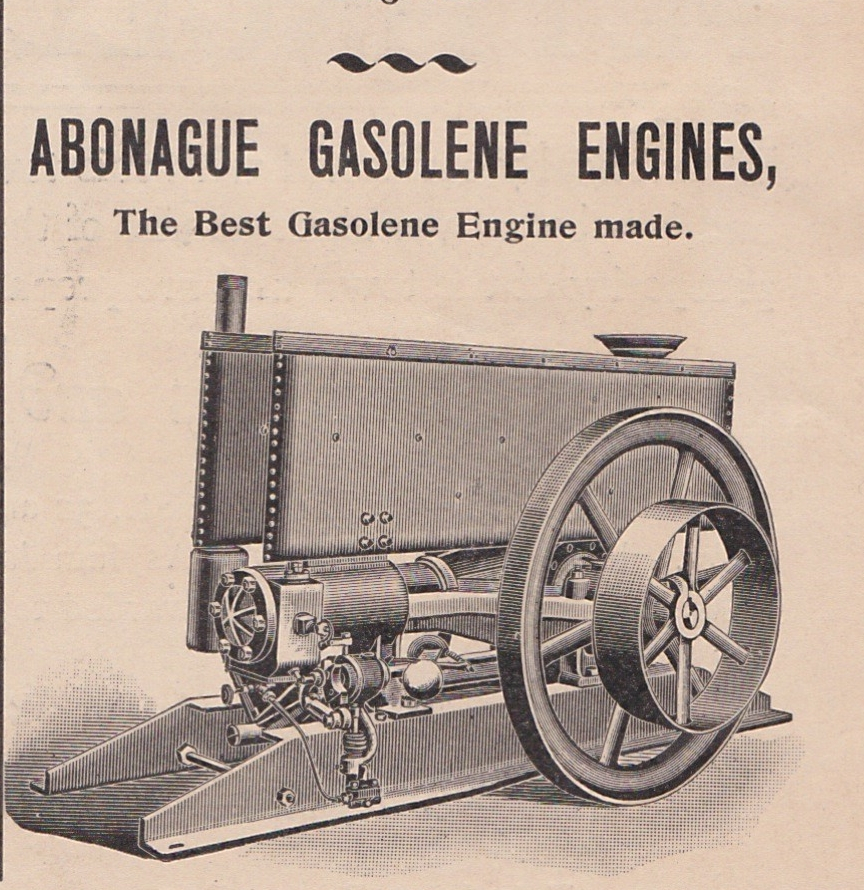 As the 20th century dawned, Danvers’ long-held farm town traditions became mixed with a new century of business and commerce that revolutionized daily life for Danversites. The program for Danvers’ 150th celebration in 1902 reveals much about what life was like in Danvers that year. The anniversary events are significant – with a grand parade led by Penn Hussey (whose equestrian statue is on Water St.), band concerts, a bicycle race, a “Rube” who gave a “unicycle exposition,” and races between the Danvers volunteer fire companies – but what is truly interesting and revealing are the advertisements. With ads such as a pig seller’s notice that declared “All the hogs are not found on the end seat of street cars,” those for horse products such as iron shoes, farm supplies that included new “gasolene” engines, the new “steam laundry” in town, and the electrician who advertised “speaking tubes,” the program provides a picture of a small turn-of-the-century agricultural town.

The vast majority of businesses noted in the program were clustered around Danvers Square, and one business advertised free telegram delivery within a mile of the Square. There are some similarities between the Square of 1902, and the center of town today. Luciano Zollo, a self-described “champion hair cutter” advertised a “Bay of Naples shaving parlor” at 64 Maple Street, and Zollo’s barbershop has been a fixture ever since. 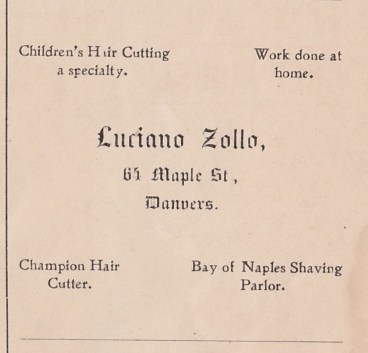 Perley’s Corner Market, a combination grocery store and general store that opened in 1800, stood where CVS is today, and CVS serves more or less the same function as Perley’s store did then. Another grocer advertised that they were a distributor of King Arthur Flour, still in stores today. Though there was no Knights of Columbus on Elm Street, there was the Catholic Order of Foresters, a fraternal organization that provided life insurance to its members – a function of the K of C today. 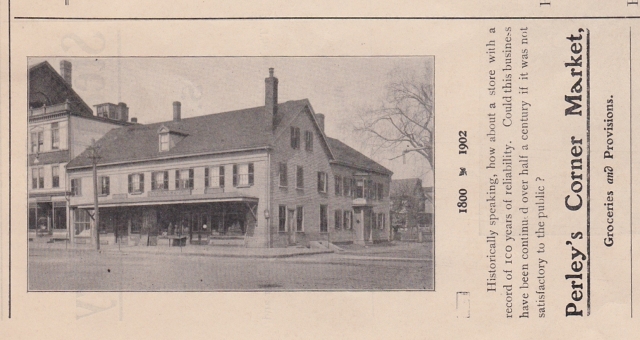 In contrast, many business practices have changed in the past century. Several business ads give not only the address of their business, but also the proprietor’s home address where business was also transacted. In 1902 some businesses did not have their own telephone number, and their ads simply note “telephone connection,” and one had to call the operator to be connected through. Moving goods was its own issue in the day of horse carts, and several freight carriers advertised their services. One such company announced its four daily trips into Boston where goods could be transferred to “railroads and steamboats,” and also reminded its customers that it “Runs direct to Danvers Asylum daily.”

Some businesses seemed to provide odd combinations of services: An express freight delivery company also sold sod cutters. One Salem business advertised “Balletto tables” (now known as pool/billiards tables), along with cameras, and “All kinds of talking machines. All kinds of records. All kinds of talking machine supplies and repairs.” J. F. Porter in Danvers Square sold “refrigerators” (what we know as an ice box) for $11 and also screens to keep flies out of the house.

Specialization was coming to Danvers, though, as one insurance agent’s ad noted: “The time has passed when the insurance agent was also bill poster, white washer and general utility man. Insurance is a business by itself.” One other specialist was Ferdinand A. Butler, who sold bicycles, though the ad refers to them by their nickname: “a wheel.” They were billed as efficient transportation, but also relaxing: “Drop that nerve tonic and buy a wheel, and we guarantee ‘that tired feeling’ will soon disappear.”

Outside of the Square, there was a coal yard on Holten Street, a greenhouse near Walnut Grove Cemetery, a man on Endicott Street who ran a sand and gravel business out of his house, a wagon maker on Andover Street, and mills and foundries in Tapleyville and Danversport. One such mill was Lummus & Parker’s grist mill on Water Street, which was standing at least as late as 1969. Another business outside the Square was the Calvin Putnam Lumber Company, noted in a previous article in this series, which was located at the Mill Pond.

What is most fascinating are the medical and dental ads. Dr. E. F. Carter, a dentist on Maple St., had an ad that noted “Electricity employed in desensitizing teeth in order to render the work of filling practically painless.” At this time laughing gas had been in use for decades, so apparently electricity was seen as the new innovative treatment. Fortunately, Novocain was developed only three years after this ad was published. Elsewhere, dentist Dr. Walter G. Fanning took out a full page ad that showed him in a cap and gown – proof that he actually had gone to school. 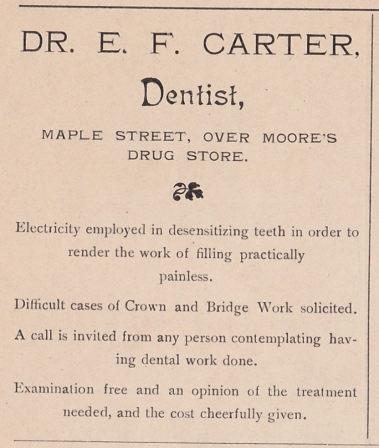 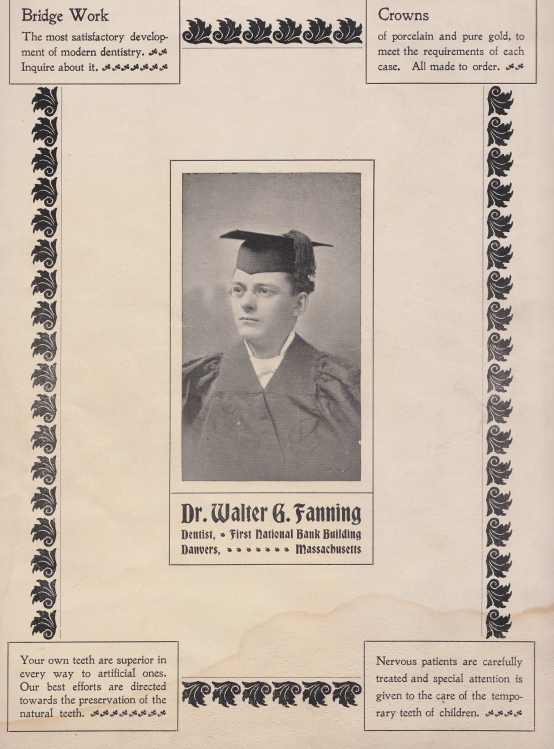 Anti-Itis was advertised around New England in medical journals, and the product was a paste that was sold by the pound, which was to be applied hot to the skin. As if the modern reader were not already skeptical that Anti-Itis was effective at all, further digging through copyright records revealed that Anti-Itis was manufactured by the Standard Crayon Company!

On hot summer days, we take for granted the treat of having a crisp cold drink with ice cubes in it, not to mention the ability to refrigerate and freeze food. In the 19th and early 20th centuries the advent of the ice industry made this refrigeration possible and radically changed the lifestyles of everyday people. Danvers was the site of a booming local ice industry during these years, and a group of Danvers entrepreneurs capitalized on this new industry by establishing an international ice trade.

The Mill Pond, known for centuries as Putnam’s Pond, was the center of the local ice trade. The pond was originally a meadow that was flooded when Beaver Brook was dammed. The dam today is under Sylvan Street at one end of the pond, and for over 250 years the Putnam Family operated a sawmill powered by the flowing water. Although not the original intention, the pond became a perfect location to harvest ice.

(Putnam saw mill in the foreground, with the ice houses in the background. Road at bottom right is Sylvan St. Courtesy of the Danvers Archival Center. Republished from Zollo, Trask, and Reedy, As the Century Turned).

The Otis F. Putnam Ice Company took advantage of this opportunity. Boards would be added to the dam to raise the water level in the pond at the start of winter. Over the course of the cold months, the pond would freeze at least 10 inches deep. Then, the snow would be shoveled off, and metal tools were used to cut a grid pattern 3 inches deep into the ice. A horse then pulled a sharp tool down the pre-cut grid lines, separating the squares into blocks of ice. 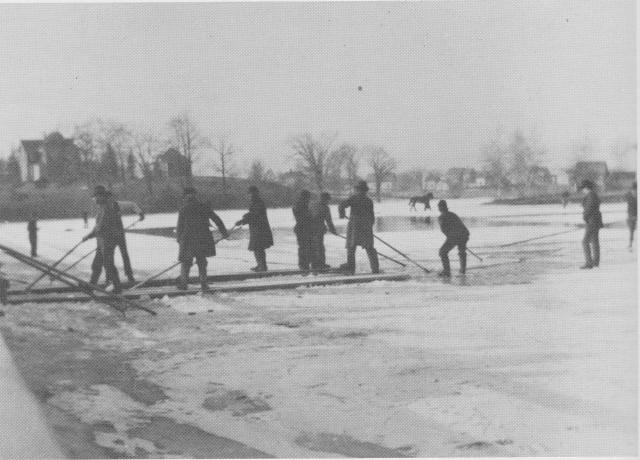 (Workers from the Otis F. Putnam Ice Company harvesting ice from the Mill Pond in 1900. Courtesy of the Danvers Archival Center. Republished from Zollo, Trask, and Reedy, As the Century Turned).

These blocks were then floated over to the Sylvan Street dam and through the narrow opening to an ice house that sat where the Walnut Grove Cemetery is now. The blocks were packed in sawdust or hay, which insulated them and prevented melting. About 6,000 tons of ice were harvested each year from the pond, and some years two rounds of ice could be harvested if the weather stayed cold long enough.

(Another view of Putnam’s ice house, located at the present-day site of Walnut Grove Cemetery. Courtesy of the Danvers Archival Center. Republished from Zollo, Trask, and Reedy, As the Century Turned).

During the warmer months, the iceman traveled around town in an insulated wagon delivering ice to the kitchens of Danvers to keep food cold in the iceboxes. This Mill Pond ice was used primarily for refrigeration, not as ice cubes in drinks. One reason is that ice was too expensive to use frivolously, but also the quality of the water was in question. Beginning in 1901 the town consulted with the state board of health about pollution in the pond from nearby industries, and the state restricted the consumption of ice to only the top most layers of the pond. 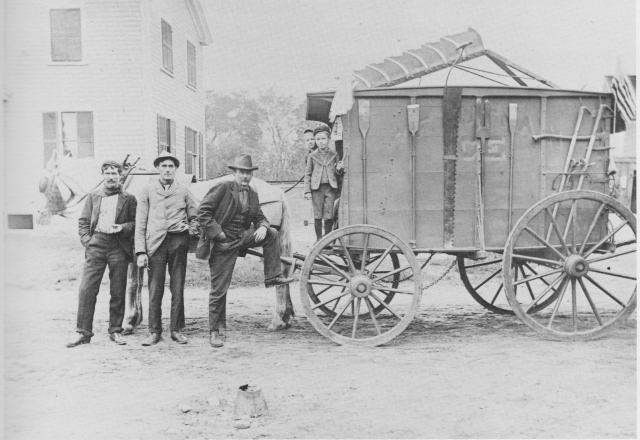 (The Otis F. Putnam Ice Company delivery wagon at the turn of the century. Courtesy of the Danvers Archival Center. Republished from Zollo, Trask, and Reedy, As the Century Turned).

While the Putnam Ice Company served local customers, another group of Danversites plied their talents at the international ice trade. In 1845 a fire swept through downtown Danvers, which destroyed the house and shop of shoe manufacturer Joshua Silvester. He then went to England to establish a shoe factory, but while there discovered the great demand for ice in the large cities of Britain. When he returned to Danvers in 1846, he suggested to several of his friends that they should enter the ice business. Silvester himself was unable to be a partner after the losses he suffered in the fire, so his friends formed a stock company led by Henry T. Ropes.

The Danvers businessmen bought out a Salem company owned by Charles B. Lander that was doing a brisk trade sending ice from Wenham Lake to icehouses in Liverpool, England. The ice was cut and collected at Wenham Lake, and shipped by rail to Boston where it was packed in sawdust for the voyage to England. One of the builders of the rail spur from Wenham Lake to the railroad mainline along Locust St. in Danvers was Grenville Dodge, the Danvers native who later oversaw the building of the eastern half of the Transcontinental Railroad.

The business was slow to make returns for the Danvers men, but Ropes persevered and became very wealthy once the business took off.  From 1860 to 1880 Wenham Lake produced as much as 30,000 tons of ice annually, but this was not enough to meet demand. As the business expanded in Britain, the Danvers company needed to ship more ice than could be supplied locally so it expanded operations into Norway. Although it may seem hard to believe that shipping ice across the ocean in cargo ships was cost-effective, it was actually far cheaper to send this natural ice halfway around the world than it was to make “artificial ice” with prohibitively expensive machines.

The Danvers company marketed its ice not just to ordinary consumers for refrigeration, but also to the wealthy for use as ice cubes in drinks. The early shipments of ice from New England changed British society. One other early American ice company also imported American bar tenders to show the London elite how to enjoy cocktails with ice in them.

On April 2, 1892, a Liverpool newspaper ran an article with the headline “Ice is King” which described the Danvers company’s enormous success over the previous decades. The article also noted that the company had presented a gift of ice to Queen Victoria and the Royal Family, who were quite pleased with this new luxury.

Both locally and internationally the ice industry continued until the age of electrical refrigeration. The ice houses along the Mill Pond in Danvers burned down in 1935, thereby ending the local harvesting of ice. But, the ice at the Mill Pond continued to be used by children who skated on it for decades, until it no longer froze through solidly enough to be safe.